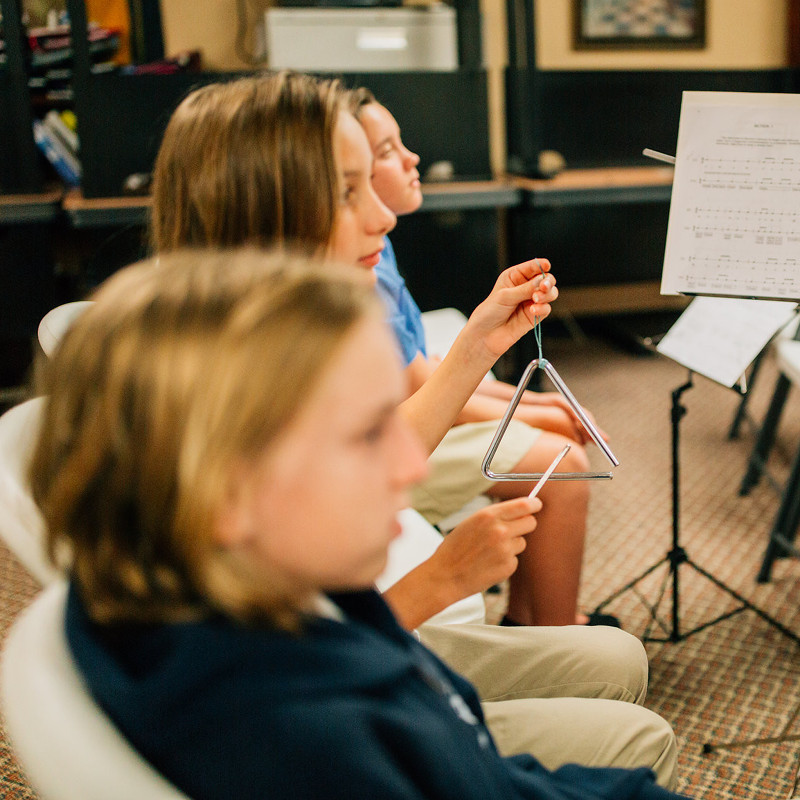 Geneva teaches Music Appreciation to its Grammar students (kindergarten through sixth grade).  The teaching emphasis is on music being a gift from God whereby we can enjoy Him and each other.

Our curriculum includes rhythm and movement for K5 and 1st grade and an introduction to Classical Music beginning with the Baroque Period and progressing through the Modern Period for 2nd through 6th grades. We study the life and times of the composers, musical instruments and their development (the orchestra), Opera for Kids, and American Musical Theatre.

The Upper School intermittently offers a Music Appreciation course for Rhetoric students which is a study of the musical elements, the requisites of good and truly beautiful music, and the development of music throughout history, beginning with the ancient Greek and Roman periods.

Students attend and report on selected live instrumental and vocal music concerts, in which they objectively and subjectively listen for application of tone color, rhythm, dynamics, melody, harmony, texture and form in the music, and even critique performances.

In the Music history segment of the course, students learn about the cultural, political, artistic, philosophical, and religious influences that characterized the music of each time period.

Geneva endeavors to present the students with the timeless criteria that produce truth, goodness and beauty in the music of any age. Students are encouraged to evaluate any music they encounter against these criteria so that they can recognize music that brings glory to God and greater knowledge of His wonderfully creative character. 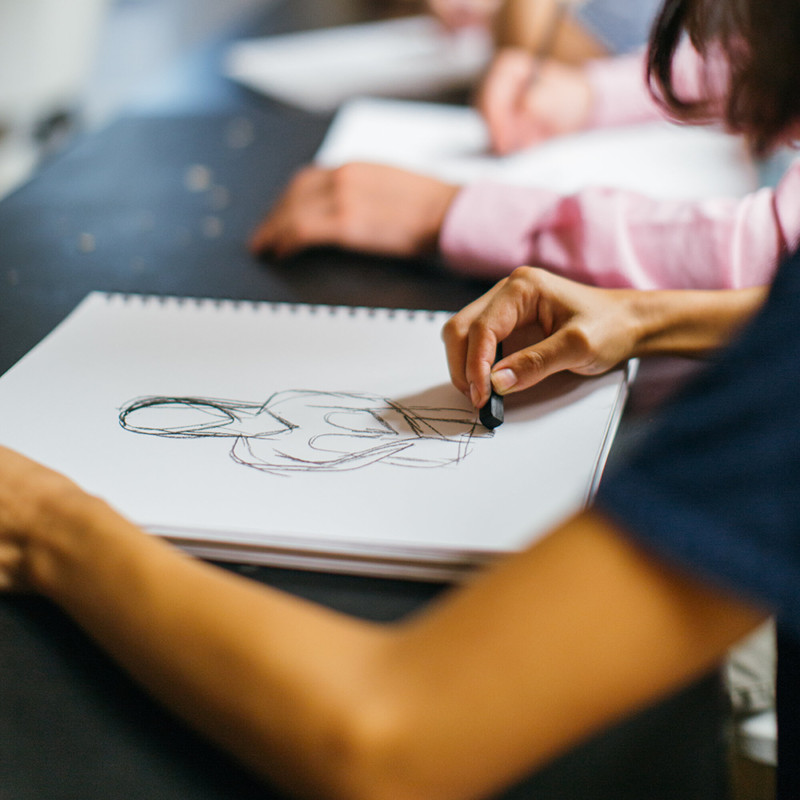 Art gives us a glimpse into societies otherwise long vanished. Art finds its expression in all areas of our daily lives, inspiring us and engaging us in the creative process even as we imitate God, the ultimate Creator.

All students take art at Geneva in an effort to instill in them an appreciation for the beauty of God’s creation and to inspire them to imitate that beauty in their own work.

The art program for the dialectic and rhetoric students focuses primarily on two areas: creating and analyzing.

Students are given the means to explore their own creative abilities in such areas as drawing, painting, mixed media projects, and photography. Geneva’s art program emphasizes that God created each of us as creative beings.

Geneva also emphasizes the analysis and appreciation of art from a biblical perspective. Students have the opportunity to view and discuss great works of art and to consider the purpose behind each piece. Studying art allows the students to place art in context with the rest of history and to see the way in which culture influences the art world and vice versa.

The goal of the Geneva art program is to encourage and challenge students to pursue artistic endeavors, develop their creativity, appreciate art, and understand its place in our world.

“Three Visions Necessary for the Christian Artist” by Vito Aiuto

“Why You Need Art in Your Life” by  Jordan Peterson 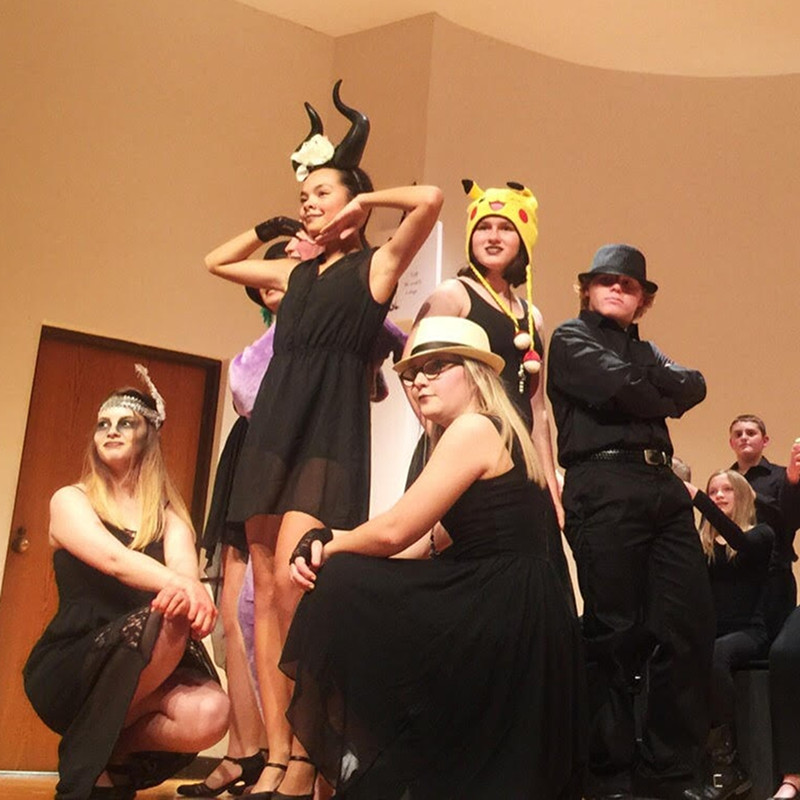 Theatre arts students are taught, tested, and receive scores in GCA Performance Arts, Stage Logistics, The Artful Monologue Delivery, and The Anatomy of a Play. These lessons not only teach students theatre etiquette but also the skills necessary to audition for and perform in a production.

Each year the students work together with their Director to produce two full-length shows – an original Shakespeare show and a spring play. Students also have the opportunity to participate in Platform Youth and Art, an annual county-wide student showcase, and GCA’s theatrical fundraisers Colonial Christmas and Scared to Death by Literature.

The Geneva Shakespeare Counsel is extra-curricular for Upperclass students. The Counsel works to plot the annual Shakespeare performance which becomes part of their class score. Participation on the Counsel is by invitation only.

Every student in Theatre Arts Class is given a speaking role in this production, allowing them to practice their skills of rhetoric in front of an audience. Students are required to study and analyze the show’s content before memorizing lines and executing the performance.

After the production, the most diligent and dedicated students are invited to serve on the Geneva Shakespeare Counsel. This counsel meets over the summer and after school to plot the next year’s original Shakespeare script.Along with the Florida Dance Theatre Training Academy, Geneva won the 2012 Platform.5 Youth & Art Performance Award for a collaboration choreographed by Freddie De Jesus, the Associated Artistic Director for Florida Dance Theatre, and directed by Amber Grubb.

The annual spring play production is a class effort from start to finish. The season begins with the selection of the given year’s script. Students read and analyze a number of scripts for consideration. A student vote is then taken to determine which script will be produced.

Once the script is chosen, open auditions are held and students are given the opportunity to experience the pressures of monologue delivery, choreography, and various other exercises and to impress the director and secure a role in the show.

Regardless of whether they are cast in the show or not, students are, based on their strengths, divided into groups to handle various production tasks such as costumes, props, marketing, set design, decoration, and concessions.  This gives students a broader view of the production process and enables them to get a feel for what aspects of a show they enjoy most.